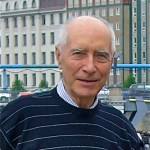 Enrico Serpagli, known to friends by the nickname of Giulio, was born in Borgo Val di Taro (Parma) in 1936. After the years of the youth in Bedonia (Parma), his family moved to Sassuolo in the early 50’s. He attended the senior high school and the university in Modena.

Photography became an integral part of Serpagli’s job when, after his degree in Geological Science, he became university teacher in Palaeontology and started his didactic and research activity first as assistant and later as full professor at the Universities of Turin and Modena.

He also gives a series of six-month lectures and “short courses” in foreign universities, including the Freie Universität Berlin.

He dedicated almost 50 years to scientific research publishing more than 130 scientific articles in the most important international magazines. His photos of geologic outcrops and stratigraphic sequences as well as those of fossils, are numerous and were used to illustrate various scientific publications.

It cannot be said that Serpagli has gradually shifted from “professional” photography to “artistic” photography. Nevertheless, it only began in the 80’s, during his numerous field trips to collect fossil samples but also during his spare time, that he became progressively more attracted by “informal” and fantastic images he captured with a shot and that he jealously guarded.

Therefore, it was only after his long career as a University Professor and Researcher that, at the end of the 90’s, he was first challenged to emerge as an artistic photographer by Beppe Zagaglia and it is for this reason that his artistic career has been rather short-lived. Enrico Serpagli now lives and works in Sassuolo.